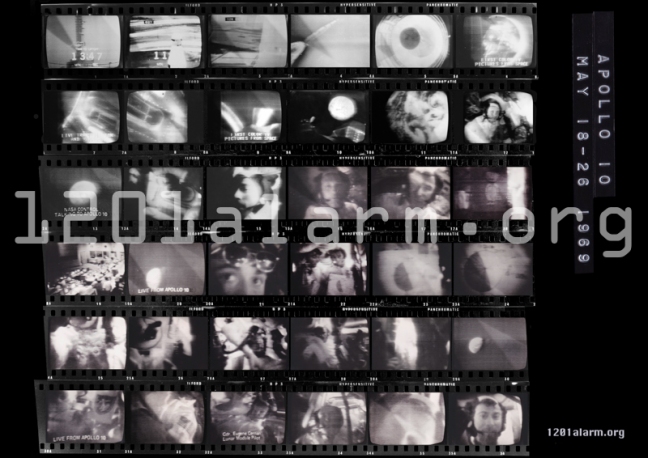 Although the glory always goes to the Apollo 11 moon landing,  Apollo 10 was a remarkable mission and celebrates its 50th anniversary. The mission was to test out the Lunar Excursion Module (LEM) in lunar orbit. Separating from the Command Module (Charlie Brown), the LEM (Snoopy) would skim the moon just a few miles high. Or as Lunar Module Pilot Gene Cernan put it: “I’m tell you, we are low. We’re close baby!… we is down among ’em, Charlie.”

Back in 1969 I was busy photographing our family’s television screen and recording sound with a reel-to-reel tape recorder. By necessity much of the television coverage was from inside the space craft, so in celebration of the mission I have recreated a 35mm film proof sheet using the same film stock, Ilford HP3 and used the images that I captured from our family t.v. set and I’ve also digitised those recordings and placed the MP3 files in this drop box. You’ll find a high resolution version of the proof sheet there too.

One thought on “In celebration of Apollo 10”